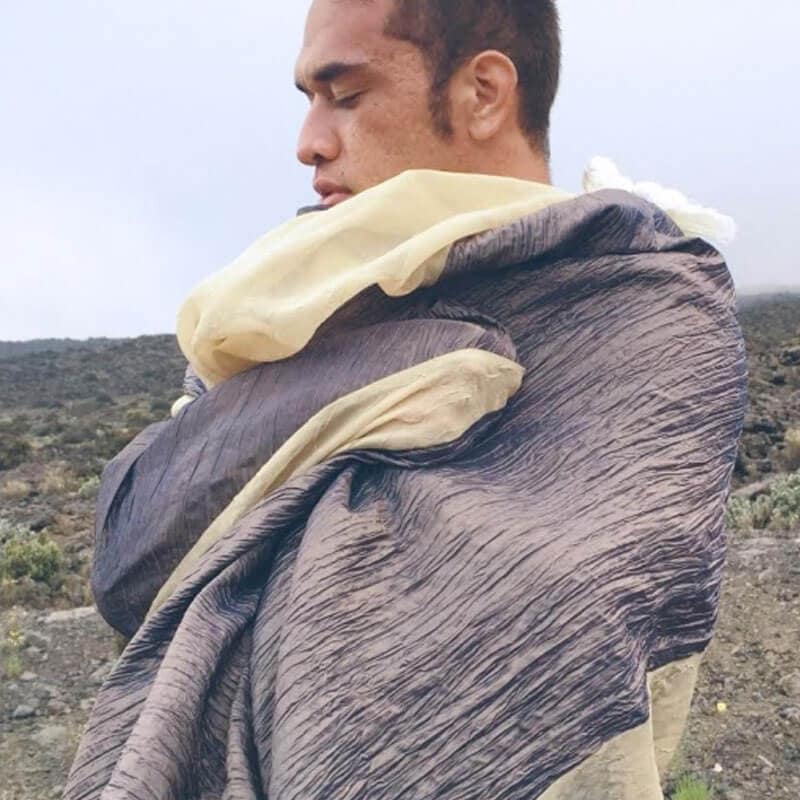 It had been a goal of the Manaola Hawaii team to make our way up the mauna to pay our respects to the goddesses and to capture our collection in one of the many wahi pana (sacred spaces) that inspire our designer.

Born and raised on Hawai‘i Island with deep familial ties to the mountain, designer Carrington Manaola Yap and his ‘ohana have been active in the aloha ‘āina movement to protect Mauna Kea. It seemed only natural to root himself to his foundation and to mālama that spiritual connection.

On Sunday, May 31st, our team headed up the mountain with plans to shoot near Pu‘u Huluhulu, but the mountain had other plans. As soon as we were prepared to set up our shot, the rain came
down, gentle at first, and then in a heavy curtain of icy drops. We were being nudged further up the mountain, and so we heeded the call. We packed up the car and drove further, hoping to find
a break in the rainclouds where we could shoot. We drove past the observatories, where Mauna Kea protectors were gathered behind tents and trucks, lining the roads with signage in support of
the mountain and its cultural importance. We continued driving until we reached the summit, where we were greeted by a blanket of fog.

Manaola slowly made his way up the side of the mountain, acknowledging the presence of the akua (gods) who dwelled there, asking permission to enter the sacred space. And true to form, he adorned himself as thoughtfully and artistically as he does the models he sends down the runway. Enveloped by the honua train he designed specifically for this purpose, he explained the significance of the its use.

“The honua train doesn’t just mean the world, or the globe or the earth, it’s so much more. When I stand here in my train, I am standing on a firm foundation of place. The place that I come from is Moku O Keawe, so I live and stand in an art piece which is where my inspiration as a designer comes from. The movement of the train represents the movement of air, because its what surrounds us– it’s what breathes. When that train moves through the air, it cleanses the space so that it honors it.”

Such is the Manaola lifestyle, deeply rooted to time and space, and always intended to honor the foundation of the designer’s cultural traditions.