MANAOLA honors kapa tradition with the Hoʻoniʻoniʻo print, created as an homage to the guild of women known as wāhine hoʻoniʻoniʻo as well as the goddess Laʻahana. The wāhine were talented graphic artists who worked in the hale kua (the womens beating house where kapa was produced) and were in charge of the final stages of kapa decoration.

Hoʻoniʻoniʻo means “to spot or streak,” a simple geometric style used in ancient prints and often seen in archaic kapa fragments. The 3 center lines of this pattern were created using a lapa tool, or a kapa liner often made of kauila wood, ‘ohe (bamboo) or tortoise shell sewn onto laths. This modern offering is MANAOLA’s interpretation of reimagined Hawaiian stripes.

The simplicity of Hoʻoniʻoniʻo showcases the designer’s affinity for ancient artistry as well as the foundation of kapa design. Through this print, MANAOLA celebrates the women of this tradition as well as the goddess who guided and inspired their creativity, Laʻahana (laʻa meaning sacred, hana meaning work), the patron diety of the sacred arts.

As its name denotes, the Nīʻau pattern mimics the literal mid rib frond of the coconut leaf. From this sturdy spine or stem, narrow leaflets form clean geometric lines represented in this print as an homage to the profound niu or coconut tree. Hawaiians, like many Polynesian cultures, hold the coconut tree in high regard for its sustainability and multi-purpose usage, utilizing all parts of the tree which yield materials for medicine, fuel, food and shelter.

Hawaiian mythology also refers to niu as a kinolau or earthly manifestation of the god Kū, who represents fishing, farming and war. This staple canoe plant is key for survival, and wai niu (coconut water) is considered sacred, used in ceremony and special occasions because it exists in the elevation of the gods. Wai niu is also the only water that can be offered to the gods as it is the only water that is not touched by human hands.

With MANAOLA’s NYFW debut still fresh in the minds of many, we are proud to announce and share the manaʻo behind one of the Kōlani Collection’s most prominent prints – Peʻahi Niu.

The Peʻahi Niu is a primitive print honoring the crescent-shaped Hawaiian fans reserved for Hawaiian royalty. Made of intricately woven coconut pandanus leaves, these fans are often depicted in lithographs by high-ranking monarchs for both practical and ornamental use. These native artifacts are now highly revered for their royal association and preserved in the likes of Hawaiʻi’s Bishop Museum, as well as a special collection of Peʻahi Niu in London’s British Museum.

Manaola pays homage to these heirlooms with an ethnographic print that blends his affection for Hawaiian traditions and modern fashion in unexpected formations.

For the Kōlani runway show at NYFW, Manaola showcased four variations on the Peʻahi Niu print, some in scaled sizes. 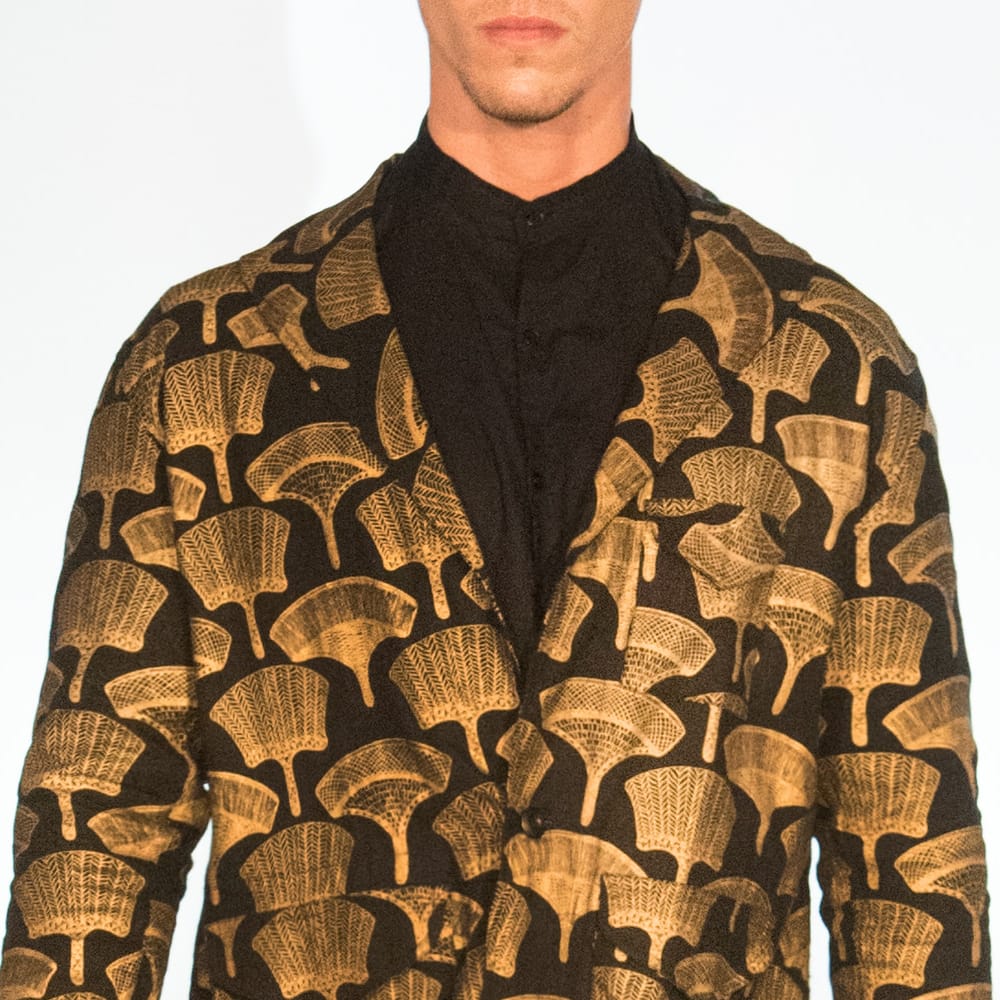 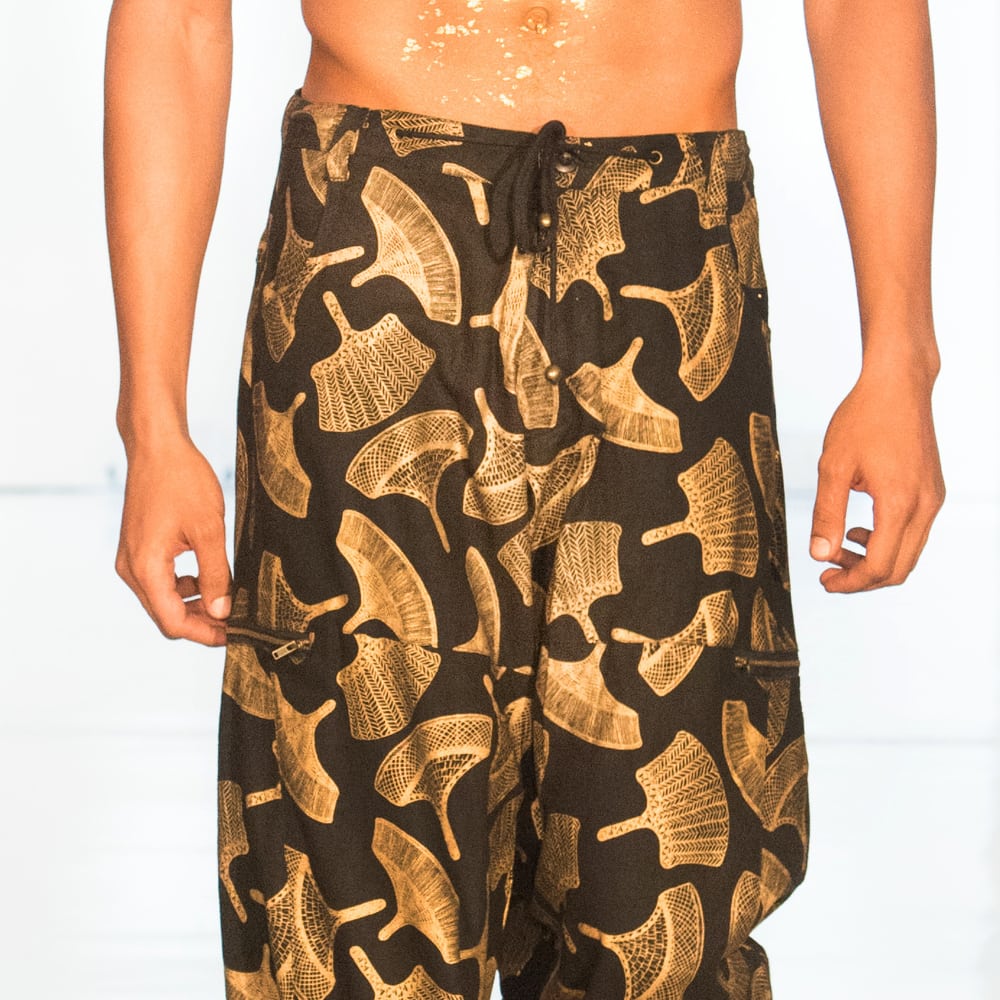 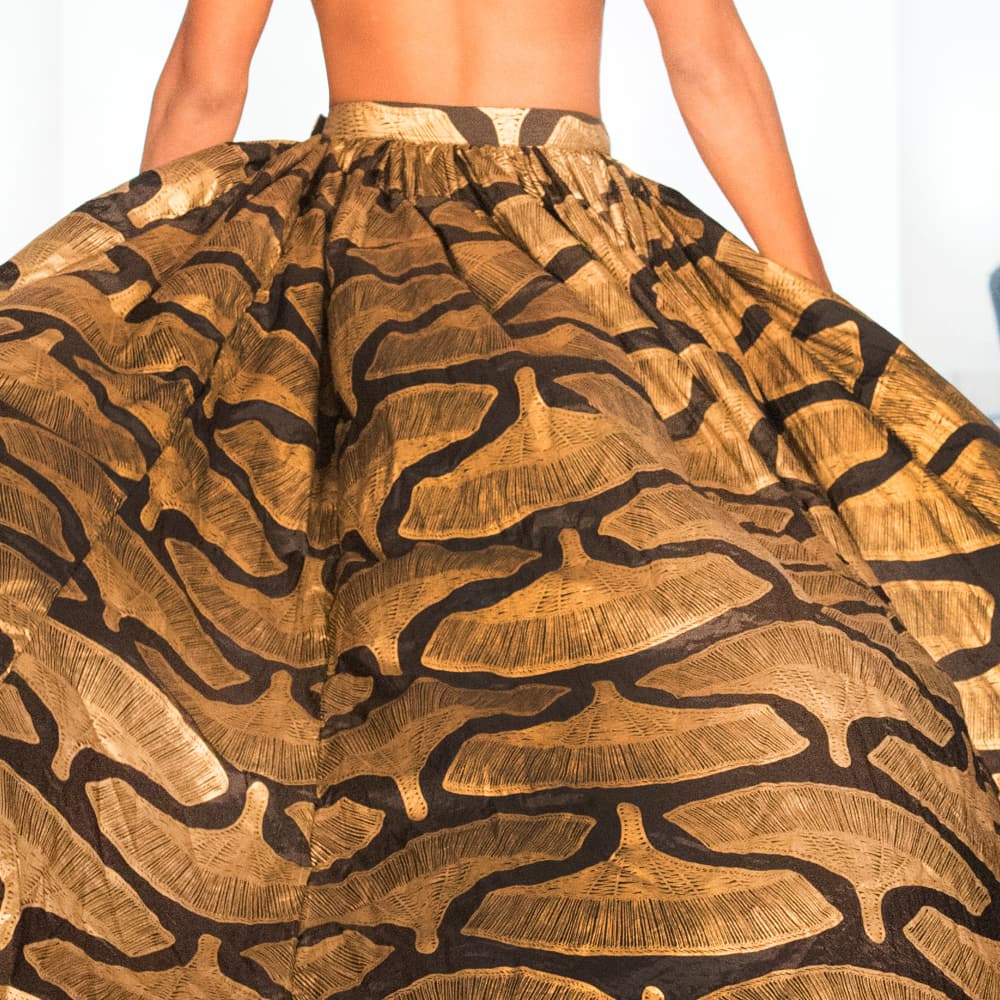 New York Fashion Week (NYFW) –  It’s the fashion event of the year where supermodels, fashion designers, and the highest authoritarians of the fashion world gather together to launch the season’s first week of Spring/Summer fashion collections. For Manaola and his team, showing the newly revealed Kōlani collection at NYFW marked the beginning of a new era– not only for the label, but for all designers, artisans, and other individuals currently working in the Hawaii fashion industry.

Let’s have a recap countdown of the show:

You may watch the entire show below:

In Hawaiian culture, Mauna a Wākea—the tallest mountain on Hawai‘i Island, more commonly referred to today as Maunakea—is revered as a sacred place. In mo‘olelo (stories), the mauna (mountain) is considered to be the child of Wākea, the sky father, and Papawalinu‘u, the earth mother. Upon the mountain summit, Wākea charged the creation god Kāne with custodianship over the mauna. Kāne gave birth to four fully-formed water goddess: Poli‘ahu, the goddess of the snow, Waiau the guardian of the lake, Kahoupōkāne, the guardian of both the summit of Mauna a Wākea and the summit of its sister, Maunaloa, and Lilinoe, the goddess of the mists.

MANAOLA honors the four sacred goddesses of the mountain through the Mauna print, which features four different mauna shapes. At the top is the shape representing Poli‘ahu. Waiau’s is placed at the bottom. Lilinoe’s is on the left and Kahoupōkāne’s on the right side of the pattern which, symbolically, is closest to Maunaloa and the older Mount Hualālai.

The foundation of MANAOLA’s designs begin with the cultural values of nature and Hawaiian art traditions. As a designer, Manaola Yap seeks inspiration for his original carvings from repetitious patterns found in nature.

The Kapa print transforms simple geometric shapes representing Hale Kua, the womenʻs beating house where the final stages of kapa beating and adornment were completed and hung to dry. The line of negative space between the hale represents water, an essential element used in processing kapa.

By placing the Kapa in repetition, it forms a symmetrical reflection of the hale, a mirror of the indigenous art form and its modern-day reflection in contemporary Hawaiian designs. This print was created as an homage to the time-honored tradition of kapa making and the many kapa masters who have inspired Yapʻs career.