In celebration of the Yap ‘ohana’s Chinese heritage, they celebrate the Lunar New Year with traditional Lion Dance performances throughout Hawai‘i with the Big Island Shaolin Arts group, led by their father, Edward Yap. As Chinese New Year approaches, designer Manaola Yap reflects on some of his favorite memories of this festive holiday and the special traditions he and his family share.

What Chinese New Year traditions do your family practice each year?

Each year the Lunar New Year for our family starts with a clean house which is crucial to the New Year celebration. We always pop firecrackers on the four corners of the house to send the smoke signals to the heavens for blessings and perform the Chinese Lion Dance.

What was your favorite part of the Chinese New Year celebration?

As a keiki, my favorite part of Chinese New Year was traveling throughout the islands to local business and performing the lion dance for them with Big Island Shaolin Arts group.

What is your favorite Chinese New Year memory?

Growing up, my favorite part was going to Tong Wo temple in Kohala, which is the oldest early Chinese temple and society house. The alter tables were always dressed and crowded with incense, colorful decorations and all kinds of delicacies. When the festivities and blessings were done we would feast on an assortment of foods that the local Chinese families of Kohala would bring.

What does it mean to you to have a store to bless for Chinese New Year?

It’s important for us to bless the MANAOLA at Hula Lehua to assure good tidings for the new year.  It’s tradition for many Chinese-Hawaiian business owners like myself to welcome the ambassador of heaven to dance, to ward off all negtivity and shower blessings throughout our business for success in the new year.

Kōlani means “belonging to the heavenly ones”, or “belonging to royalty”. Kōlani refers to the traditional seated dance, hula kōlani, where dancers performed these hula noho to honor Hawaiian monarchs.

This collection was humbly born as a vision of how modern-day ali’i would adorn themselves in Hawai’i and throughout the world. Kōlani notes the multicultural influences of ali’i through their worldly travels into a collection that would distinguish Hawaiian royals for their international fashion savvy on a global stage.

Debuted in 2016 as one of MANAOLA’s signature collared shirt styles, the Hilo design is a modern take on the iconic “aloha shirt.” The Hilo was named for the native technique of fiber twisting of which ‘aho (traditional Hawaiian cordage) was made. These lashings represent strength and were a foundation of Hawaiian structures, used to lash wooden hulls of the wa’a (canoe) as well as housing pillars. 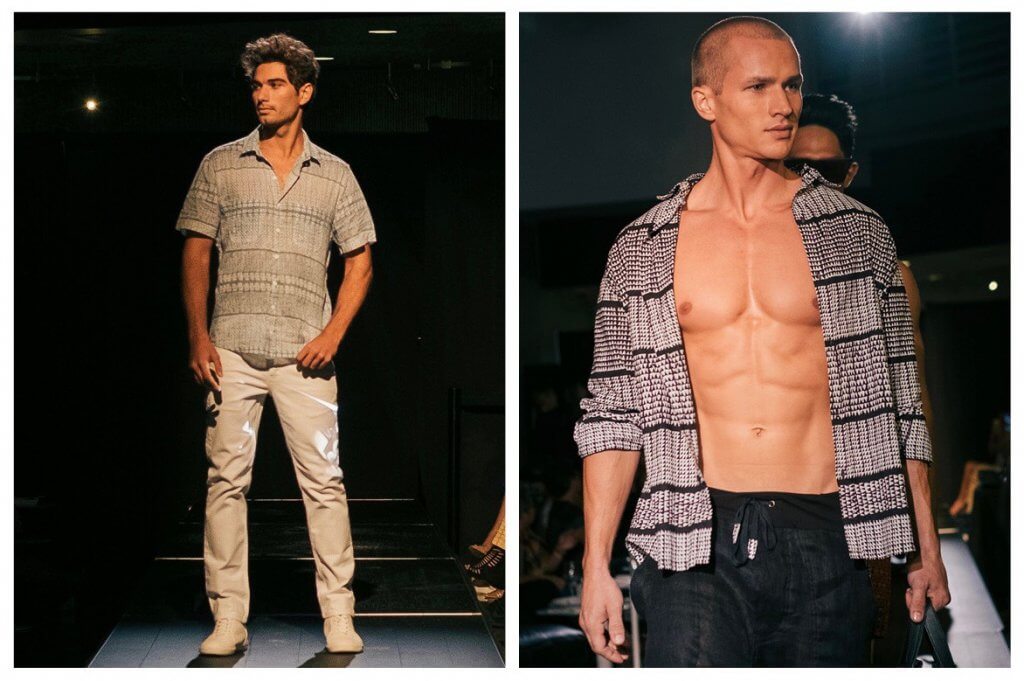 As Hilo means “to twist,” MANAOLA honors this technique by twisting the fabric of our slim-fit collared shirt to create an organic texture similar to kapa (native bark cloth). The contemporary cut of this lightweight cotton fabric and Hilo technique accentuate the form of the wearer and create a statuesque silhouette in both short and long sleeve styles.

When do you feel most creatively productive?
When I am carving (ohe kapala). Although in my process of design its my first step in art preparation, but it is the most calming and exciting part for me because its such a traditional craft that helps me transcend time for a second.

If you had more hours in the day how would you use them?
I would probably exercise more because health is really important to me.

What is your favorite thing to eat when you are home in Hawaii?
Canned salmon and poi is what my grandma ate, what my mom ate, its so simple and makes me feel at home. Any kind of fish and poi or dried fish (usually aku) reminds me of home.

How do you pass the time on long airplane rides?
Watch movies and listen to music.

What kind of music do you listen to to unwind?
It depends on what I am doing, it changes a lot. I like reggae music, Beyonce, Maisey Rika and classical music, too.

VIP Fashion Dinner guests dined on an exclusive meal in collaboration with Stage Restaurant, offering a 4-course dinner and wine pairing inspired by MANAOLA’s new original prints. A special pre-show performance by Starr Kalahiki and Irie Love greeted guests in Amuse Wine Bar before the runway shows, with an on-site pop up shop following the presentation in the Ice Garden.

MANAOLA Hawai’i would like to mahalo our fantastic partners for lending their support and talent to us to create an unforgettable evening: Honolulu Design Center, Irwin Mencias, Paul Mitchell The School Honolulu, Arthur Wilson and staff, Allan Cool, Page Dance Academy, Irie Love, Aaron Yoshino, Adam Palumbo, Modern Luxury Hawai’i Magazine, Andrew Mau, Workshop28, the talented performers and models and all of the incredible kokua who generously offered their time to backstage as well as in the pop-up shop.

Who are your greatest fashion influences?
My mom was always my fashion influence because she was always well put together and fashionable. She is one of my main fashion influences. I grew up around a lot of Hawaiian designers doing fashion shows with them so I was really inspired by the things they produced and being around them and being able to see what they saw and watch their looks come together-Nake’u was a big inspiration. The things he paired together were always so unexpected and striking, some things I didn’t really understand until now. He was so on it, and it was always so original.

What are your favorite ways to relieve stress?
I love to exercise, a good workout helps me to mellow my mind. Because I’m so creative, my mind is always moving and creating, which is also why I love music, it helps to stop the chatter in my brain.

Whose fashion career would you like to emulate?
I like Carolina Herrera, I love what she’s built for herself and her family and how she uses her family and her daily life in a lot of her designs, which is what I love to do. She names certain pieces and collections after her family and I like to design clothes named after family or friends who embody it well.

What is your favorite pau hana drink of choice?
If I am at the beach (normally after paddling) I drink Heinekin. But if am out I like a very classic Grey Goose Cape Cods (cranberry juice, vodka & squeeze of lime). Grey Goose is distilled 7 times which is the highest content you can find. Grey Goose kills free radicals in the body but it is not detrimental to your health.

What was your favorite moment of Melange 2015?
My favorite moment was watching the show, even though I was running back and forth. There was so much joy in everybody’s faces and seeing all of the models who were so excited to wear our clothes, both our brand ambassadors as well as new models that we met in San Francisco.

Honolulu Design Center hosted the first independent fashion show for Manaola Hawaii to launch our Summer 2015 collection. Guests gathered on Friday, June 19 for cocktails at Amuse Wine Bar and were welcomed with a performance by Starr Kalahiki, Asialynn and Ed Yap. Videos and interview by Vision Horse Media introduced guests to the brand by detailing the design inspirations for each of the four prints highlighted in this collection, as well as moving footage captured at Kawaihae and Mauna Kea.

The fashion show started at 7:30pm, cleansed with salt by the designer before he opened the evening with an oli. A hula noho was performed by his sister, Asialynn, honoring their ‘ohana’s hula foundation. As the hula ended, the lights dimmed, before Asialynn returned to the spotlight with pū‘ili in hand, and began the fashion show.

85 unique looks designed and styled by Manaola Yap were featured, including jewelry from Dean Ka‘ahanui, Pi‘i Ali‘i and HinaJwls Hawaii. From black and white neutrals to soft pastels, Manaola offered something fresh and modern yet distinctly Hawaiian, in a wide array of silhouettes and colors.

After the designer took his final bow to mahalo the crowd, the house lights went on and signaled the pop up shop to open. It was an unforgettable evening celebrating Hawaiian creativity, and we could not have been more warmly received by those who joined us.

Manaola Hawaii would like to mahalo our fantastic partners for lending their support and talent to us to create an unforgettable evening: Honolulu Design Center, Irwin Mencias, Paul Mitchell The School Honolulu, Arthur Wilson and staff, Allan Cool, Chariya Willis, Page Dance Academy, Puunui Wong, Calvin Canha, Aaron Yoshino, Adam Palumbo, the talented performers and models and all of the incredible kokua who generously offered their time to backstage as well as in the pop up shop. We could not have done it without all of you!

Designer Manaola Yap shares the profound mana‘o behind one of his most popular womens styles, the Hihimanu Top.

“The hihimanu design was inspired its namesake, which translates to stingray. The reason why I was so blown away by these creates is because of how elegant they are in the water,” he explains.

“In Hawaiian, when you say hihimanu, its another reference to a woman who is really beautiful, or carries herself really elegantly.” He shares the special place that sparked the design: “Kokoiki, Kohala, is known for hihimanu that actually leap out of the water, as a sign–an omen or ho‘ailona to us. When you see the hihimanu jump out of the water, it’s a blessing of the ancestors. There are a lot of stories in Kokoiki where families used to swim with them and feed them.”

Yap not only wanted to represent the hihimanu in an elegant shape that would flatter the figure of the wearer, but also used his design skills to literally showcase the elegance of the sea creature: “If you were to open your arm span wearing the top, it is cut in the shape of a hihimanu.”

FREE SHIPPING FOR DOMESTIC ORDERS $200+ *$200 subtotal BEFORE discounts. (does not include shipping & tax) * Also does not apply to Bean Bags * Dismiss